While attending the undergraduate course at Brera Academy of Fine Arts, I partecipated in the group exibithion Aula 8 (2008) promoted by Associazione Arte Fuori Centro of Rome. I also win the contest PremiArte (2008), part of an urban regeneration project promoted by the municipality of Offanengo (cr). 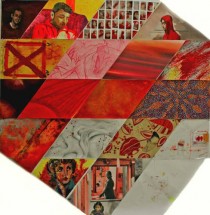 During the postgraduate course at the Fine Arts Academy in Bologna, I took part in a collective workshop with the french illustrator Joëlle Jolivet. The final project consisted of a booklet containing linoleum prints of various views from across Bologna: Bologna a testa in su (2010). I also partecipated in individual competitions where, although still at a very experimental level, I was able to figure out and hone the bases of my artistic techniques…

In 2013, as I was beginning working as an editorial graphic designer and copyreader in Bologna, I experimented with the concept of associating my illustrations to a narrative plot by working on the short silent story Unconscious  that appeared in volume V of Diorei collective (2013).
My work as a graphic designer in Bologna has put me in touch with the project Nuove conversazioni a vignetta (a collaboration between the School of Humanities and Cult

ural Heritage of the University of Bologna, the Erasmus Mundus program in European Literary Cultures and the International Festival of Comics BilBOlbul) for which I have designed and curated the cover and interior layout for the first volume: Ritratti d’autore. Tra fumetto, illustrazione e animazione  (2014).

The collaboration with the University of Bologna also allowed me the opportunity to challenge myself by working on designing logos for two online European literary journals: Interfrancophonies and Rilune.

As my technique has grown and evolved over the years, I have carried out a few personal projects, participated in several competitions and have been selected to illustrate the short story Yes, we surf  for Coccodrilli da Cilindro’s blog on the online news site La Stampa, until I decided to attend some specialized courses (like the Visual Style summer school week with the dutch illustrator Carll Cneut), including a post-graduate specialization degree (1st Level Master degree) in children’s illustration at the Academy of Fine Arts in Macerata.

In 2017, while my last graduation’s project has become a picture book (Pollicina, ed. Carthusia) and exhibited at Libriamoci Festival in Macerata, my drawings for the first international contest VinylArthink has been chosen on the short list and included in the final exhibition, printed as an “arthink book”.
At the same time I received a Special mention by the jury of Notte di fiaba illustration contest for an unpublished project, based on a revisitation of the tale The little mermaid, and selected for an illustration’s exhibition at MAG museum (Riva del Garda, Trento, Italy).

Find out more about My books.

«It is simply this: do not tire, never lose interest, never grow indifferent — lose your invaluable curiosity and you let yourself die. It’s as simple as that».